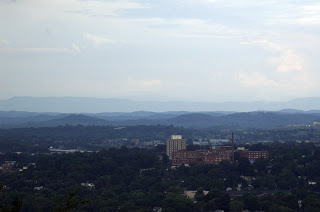 So I recently traveled to Knoxville, Tennessee to visit the town and get a feel for it. I like the fact that TN has no state tax which would save nearly 7% of my income each year that the State of North Carolina currently sucks up and spends wastefully. In fact, fuck the State of North Carolina with a freshly frozen ice dildo because they are now saying I owe them another $145 in state taxes from 2006!! I paid them nearly $2200 in state taxes in ’06 and got a measley $90 back which according to what they are saying is wrong… Gotta love how state and federal income tax folks can go back three years and claim they got their books wrong and you can’t really do anything about it…

Anywho, Tennesee is beautiful in certain parts. I loved the Smoky Mountains. Above you see a picture from Sharps Ridge in North Knoxville. Their was a sign as we came up the road to Sharps Ridge that said “No Crusing Area” proceeded by information about how the area was under surveillence for crime. We proceed up to an overlook right next to some large TV/Radio towers and pulled in to park. Sure enough, a guy was sitting in a van with all types of antennas all over it concentrating really closely as he held his hand to his ear as if he was listening for something. I sure hope he didn’t here the conversation my fiance Jenni and I were having on the way up or likely he would have learned way more then he wanted to about our personal lives. Douche bag. I felt really violated at that moment, so we then proceeded to have the most intentionally odd conversations we could just to fuck with him.

Downtown Knoxville was cleaner then I ever could have imagined. No trash around the fucking dumpsters clean. In fact, they did a good job keeping the dumpsters out of site. World’s Fair Park in downtown Knoxville is a great little place for a concert. So we are planning on going back at least by October 13th to check out Widespread Panic and the Allman Brothers in concert in that very open space. 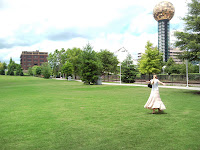 The Space Sphere was kinda old as shit and smelled funny when we got up there, but it did bring back a old fear of heights I used to have. Mainly because you were like 5 stories up and it appeared laws of physics were being defied not to mention a subtle gravitational pull brought you right to the edge of the railing to where you could see straight down to the concrete and park below. Kinda like that dream I have of being in a 80 floor skyscraper and I keep getting pulled towards a broken window until I fall out and wake up before I hit the ground with my chest pounding. Any interpretations of that dream folks?

Sales tax is 9.2% in Knoxville, however, that still doesn’t make it more costly to live then North Carolina. Consdering my income is taxed at 7% here THEN i get taxed 7% sales tax (nice double dipping that most states do). So if you think about it, for every $100 I make and spend in the state of North Carolina, only $86.94 is left after they tax me…. That means my buying power is much lower in NC. In TN that same $100 I make and spend $90.80 is left after the I am taxed. Of course that doesn’t take the bastard federal tax into consideration, which makes up another 10-12% or so. Gotta love it. Have you ever thought about that shit? You don’t ever really consider it until you OWE taxes for a tax year and realize you paid in 11% of your income to the federal government and 7% to the state government, and for every retail purchase you make you pay another 7-10% depending on where you live to the government. Shit, that being said once for every $100 I make and spend, only $75 is money I have left after being taxed…. That means I have to work over an hour EACH DAY just to pay the government for “providing” me with something I am not sure of what it is yet….. Ok, tax rant over.